The day broke sunny. Since we had a longer distance to travel today, we made an earlier departure. A little after 8:00 we began the climb out of Vetralla. As the suburbs thinned, we trudged up a long hill on a sidewalk. A cool wind lapped our faces like a playful St Bernard.

Asphalt roads ceded to a forest path as we continued to climb. (Topographical note: roughly the first eleven kilometers of this stage go uphill). We walked through oak forests in a deep shade that was very pleasant.

The oak forest yielded to hazelnut orchards. We passed the Casale delle Capannacce, which apparently once served as a pilgrimage rest station. On the other side of the road was a tiny chapel, the Chiesuola di S. Maria di Loreto. It was locked.

We continued through the hazelnut groves until we reached two stone pillars. These were the Torri d’Orlando. In popular legend, they were linked to the famous Orlando/Roland who accompanied Charlemagne on his ill-fated campaign into Spain. According to local tradition, Orlando/Roland was born here while his mother was on her way to visit the pope.

In fact, the towers have nothing to do with Orlando, but are the remains of a Roman funerary monument. It once stood sixteen meters high and would have housed the remains of a wealthy Roman family.

The first (and only) town of the day was Capranica. The Via Francigena traverses the length of the town. It begins with the modern suburbs, and finishes at the historic end of town. We stopped midway through town for a sandwich and iced tea at a bar. We met a couple of fellow pilgrims, Barry and Diane, who were from Scotland. They began their walk in Lucca, and like us, are only four days out of Rome.

“How could you have been walking for two months?” they asked. “You look so fresh.”

This is the second time in a few days that we have heard this, and it is mystifying. I haven’t had a haircut or a beard trim for the same amount of time. I have been wearing the same two shirts for two long months. After half a day on the trail I smell like a rotting rutabaga that someone has tried to freshen up with an application of ammonia. I have been sweating into my backpack lining for two months. In the evening, it sometimes gets up and moves around.

The last phase of the stage was a long walk through the forest, following the course of a small stream. Although the trail was generally good, we do move much slower on dirt trails, especially when they weave up and down stream banks.

We also had to cross the stream on small log bridges.

Ultimately, as we have on every day so far, we reached our destination, Sutri. We climbed the hill, checked into our apartment, and then, without showering, we ditched our packs and headed for the archeological park.

Across the highway from the town is a park which contains three major attractions: a Roman amphitheater, Etruscan tombs, and a church that has been carved into the side of a tufa mountain.

The Roman amphitheater was carved into the tufa. It was built (carved?) in the second to first centuries BC. Although it does not compare to the Flavian Amphitheater in Rome, it still could hold 9,000 people who would have been seated on three levels.


After admiring the amphitheater, we drifted north in front of a series of tombs that the Etruscans had carved into the hillside. At the far end of the tombs was a site with a locked door, the Church of the Madonna del Parto.

This church was certainly one of the highlights of our trip. It began its life as an Etruscan tomb. When the Romans displaced the Etruscans, they converted it into a Mithraeum --- a place where the elite worshipped the goddess Mithra. Later, after the Christianization of the Empire, the site was converted to a church. 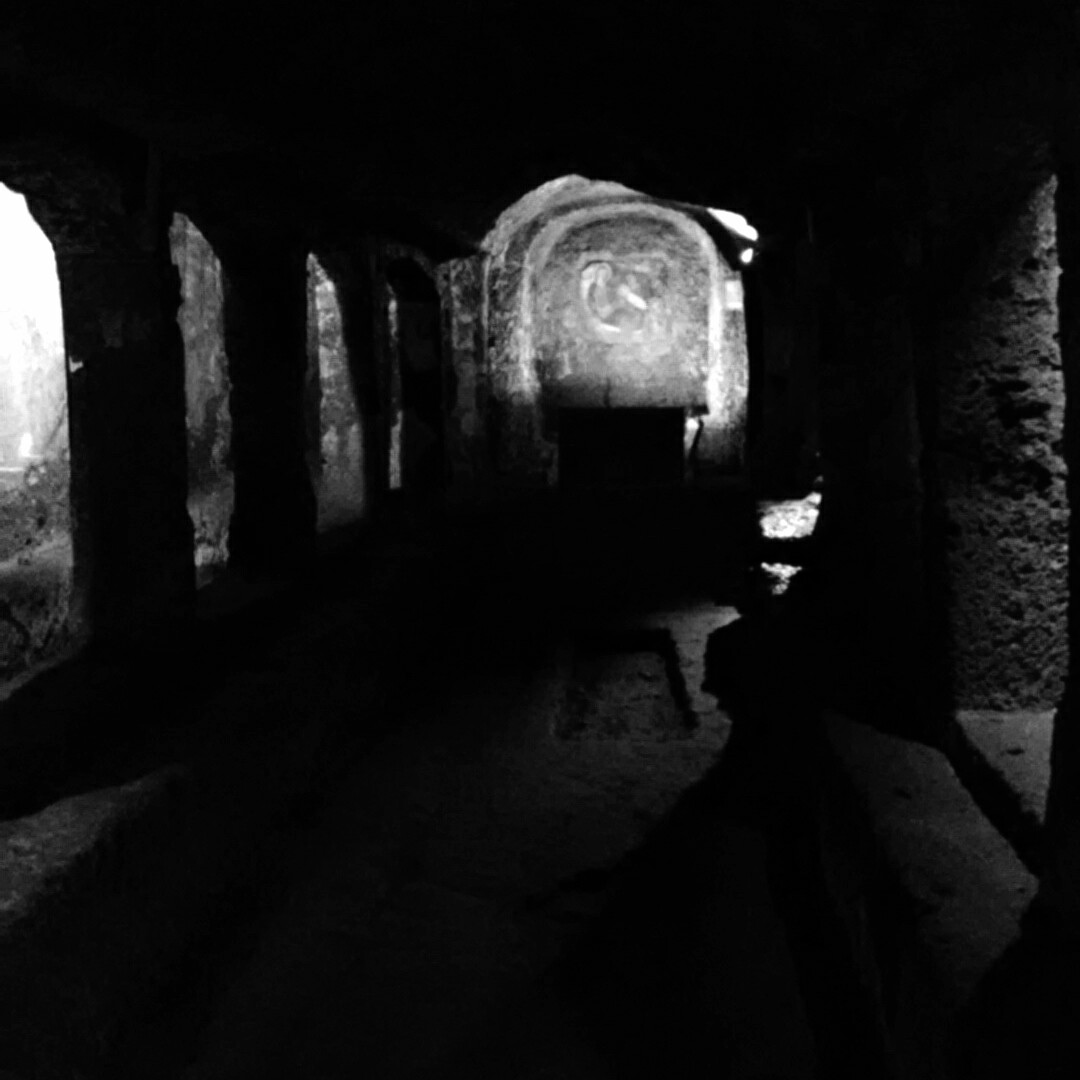 We entered through the door with a guide. In order to keep the humidity down, they only open the church for ten minutes at the beginning of each hour. Inside were beautiful medieval frescoes. I was particularly taken by the fresco in the entryway, that depicted medieval pilgrims on their way to Rome. 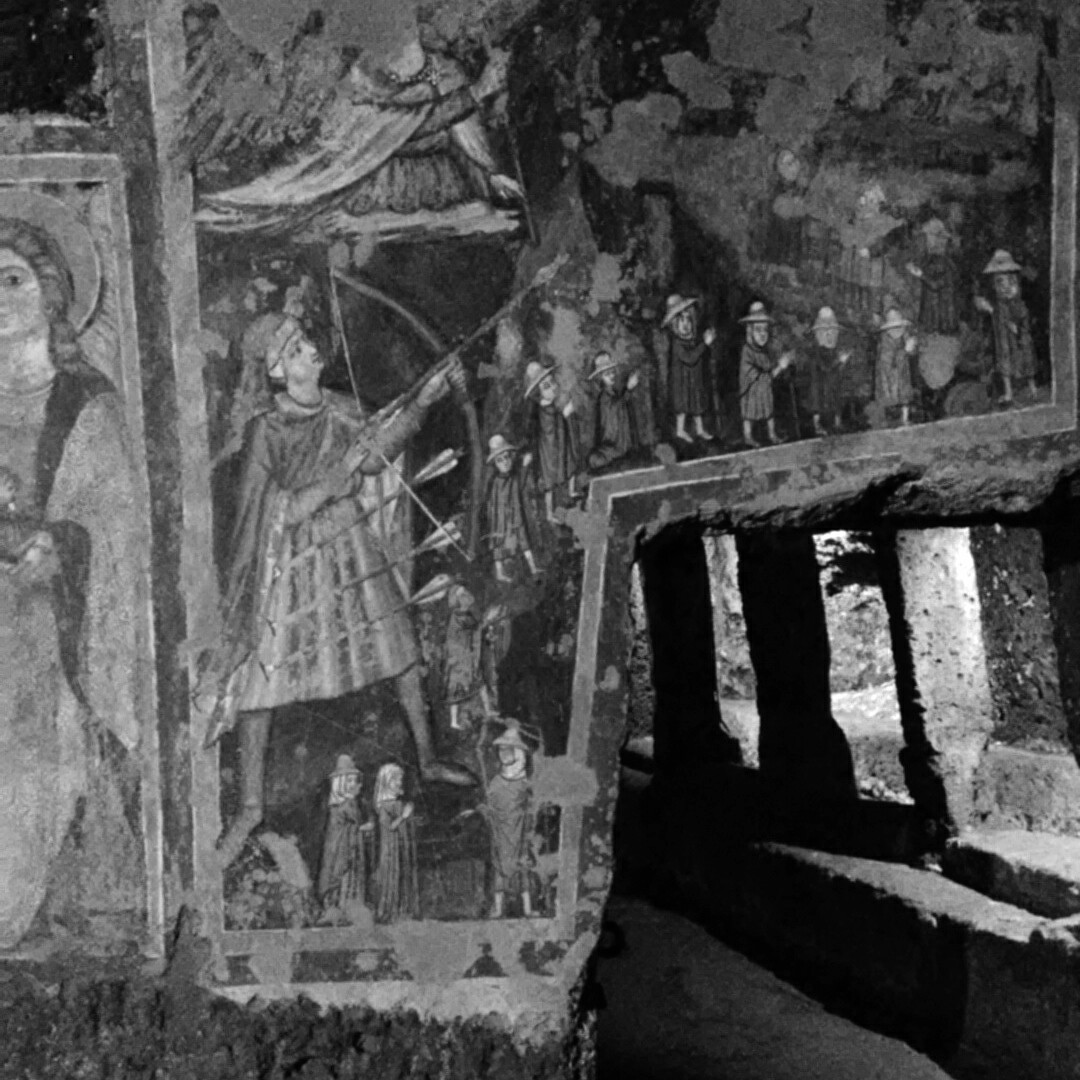 From the entry, the “church” ascends between two rows of pillars that have been carved out of the tufa. At the top of the incline is a small altar and behind it, a fresco of the Virgin Mary. It was an incredibly interesting place, one that had served the religious aspirations of three great societies.

A massive thunderstorm was rolling toward Sutri as we hurried back up the hill. A torrent of rain began just before we made it to our apartment, closing out our evening.

Posted by Riccardo Goodrich at 6:58 AM